An Inside Look at Beyond Glory the Movie

Beyond Glory is a film that's getting a lot of attention in the indie film scene. Beyond Glory (the movie) is an adaptation of Beyond Glory the book written by Larry Smith. The director and producers (8180 Films) of the film worked their creative film making magic to make sure that the film lived up to the expectations of the book.

The indie film producers at 8180 Films make sure to portray all the characters in the book as accurately as possible on the screen. As a result, Beyond Glory is receiving a wealth of attention that result in some honorable awards.

The Talent Behind the Film Beyond Glory 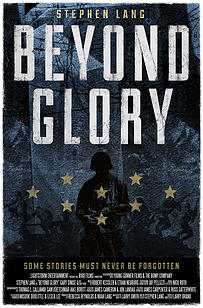 Stephen Lang, who has been in films such as Avatar, delivers a stellar performance in Beyond Glory the movie. He is also a co-writer the film and he manages to deliver a superb performance. He portrays all the characters in the film from the different ethnicities in superb style.

Although all the characters are so different, Stephen Lang manages to understand the characters and portray them uniquely. They come alive before the audience eyes with each character’s story being told in a unique way.

The 8180 Films' director of Beyond Glory manages to combine the two art forms of theater and film into one. This is one of the best combinations of this two art forms.It manages to make the story even richer and better understood by the viewers. Larry Brand is one of the few directors of indie films who can accomplish such a task so flawlessly.

The film seeks to tell the story of soldiers who participated in the WWII, The Vietnam War and the Korean War, all of whom were decorated soldiers. However, this film is not another glorification of war. Instead, it seeks to tell the story of human survival. That spirit of purpose and together that binds the soldiers together to accomplish a task.

Beyond Glory the film is an attempt to give viewers a chance to get inspired by the veterans who participated in some of the largest wars in history. It is told in a very simple and straightforward manner. The author of the book, through the course of his work, discovered that these soldiers were from different places but their stories were all similar. At the core, they are all just human beings trying to preserve their dignity.

The film is already been screened in various places around the world. This is simply the story of survival. It tells the tale of soldiers who manage to escape wars wounded but their spirit intact. Most human beings can resonate with the experiences of the soldiers portrayed by Stephen Lang. The film’s overriding theme seems to be cooperating in order to get through tough times.
Posted by Tyler Tafelsky at 2:29 PM