With portable capabilities and easy-to-use design, you can take this weighing system just about anywhere, and these weighting systems have now become a highly sought-after solution among agricultural producers, farmers, and small and medium scale industries. Let’s have a close look at what makes these portable vehicle weighing systems so high in demand among the rest.

Portable truck weighing scales are low profile systems that are designed with perfectly flat surfaces on which trucks can drive onto for weighing. As soon as the truck arrives on its weighing pads, the scale system will display the aggregate weight on the system’s digital terminal.

At the core of these portable vehicle weighing scales is a highly sensitive and sophisticated load cell that’s responsible for measuring the load and instantly transmits the data to the terminal. As load cell is one of the most important component of the portable weighing pad, it is heavily protected by a durable and incredibly strong casing.

These portable vehicle weighting systems also have two ramps on each side. These ramps are designed in way which makes it easier for trucks to drive onto the weight pad for calculation of the load weight. Many portable truck scales are low profile and ramps are not always needed, they’re a good option for use on varying surfaces and terrain that aren’t evenly flat.

Now you might be wondering how these scale systems determine only the load weight (and not the load of the truck). For accurately measuring the gross weight of the load, it’s important to measure truck axles individually before using the scale for load measurement. 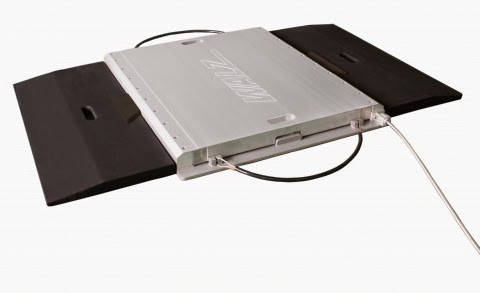 The ideal supplement for these portable vehicle weigh scales is proprietary software system that helps to maintain records and manage truck loads. You can get these scales at competitive rates from many online stores. So, do your research and choose the best one according to your needs.
Posted by Tyler Tafelsky at 9:17 AM