From Custom Tank Tops to T-Shirts, Neon is "In"

From custom tank tops to t-shirts, neon is "in." It's no doubt that more and more people of younger generations are sporting neon tank tops, caps, fanny packs, and much more.

If anybody takes a quick glance at the Spring runways of 2012, they will agree that there is a glowing and undeniable presence of neon. Reputable designers, such as Jason Wu, Rodarte, Peter Som and Nanette Lepore, featured different highlighter hues in the season designs. 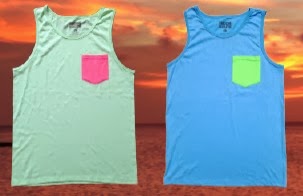 This marked an undeniable neon comeback and advertising campaigns are greeting the trend. For example, Mert Alas and Marcus Piggot shot a neon campaign by Versace featuring Gisele Bundchen. Neon is definitely back with a new sense of variability.

Why Neon Is Back As The Pillar Of Fashion

Neon accents are seen in form of a single, blinding accessory against a neutral ensemble. The trend has then manifested itself in many personalized and different applications, from a neon-painted statement necklace to a pair of neon-bright high heels with jeans and a blazer. For the Met Costume Institute Gala of 2012, model Coco Rocha debuted hot-pink ombre hair.

Most fashion adherents point to the late ’80s and early ’90s as the most celebrated moment of neon. The graffiti harem pants and the spandex workout gear that was worn by Will Smith in The Fresh Prince of Bel-Air strike back strong memories from the past. Neon tank tops and t-shirts are revived on beaches and at music festivals. In a self-reinventing industry that constantly references the past, neon’s historical fashion embrace gives insight to today’s application.

In Greek, neon translates to “neos,” which means new. The word new’ seems appropriate, putting into consideration that the substance has been finding new identities approximately every 20 years. Discovered in 1898 by Sir William Ramsay and Morris W. Travers, who were two British chemists, neon continues to find fame.

After being included in the periodic table, neon’s use became popularized almost instantly. The element’s form of huge neon signs in the 1920s allowed New York’s Times Square to define the insomniac identity of the city. By the 1950s, custom billboards in Las Vegas served as invitations into a fantasy world known as Strip’.

Neon-like colors later re-emerged in the 1960s through silkscreen paintings of Andy Warhol, a pop-culture prophet. From this point on, dynamic hues became an important part of fashion, fine arts and advertising. And in the 1980s, the desire to dress up in resemblance to a glow-stick grew, and the answer was neon In. In the early 90s, plastic jellies, fluorescent, neoprene fabric and neon spandex dominated.

The Revival of Neon Apparel

Presently, neon is fully back and in a more subtle context. From Spring Break vacation groups to college fraternities and sororities, neon is in. This new bright trend is best enjoyed in not so big doses: think bold yellow belt, a neon-green clutch or a hot-pink nail polish.

Neon colors are perfect for a wide range of clothing items, which include mini dresses, tights, leggings, fishnets, sports bras, leotards, socks, gloves, headbands and stockings. Some companies are even taking it to the next level by making neon clothing that glows under fluorescent lighting. Indeed, it can plausibly be argued that Neon still has great influence in today's fashion.
Posted by Unknown at 10:44 AM