On-board weigh scales assist operators in heavy duty trucks and equipment to help the truck operators monitor and weigh the loads that the trucks have to carry. Weighing operations have become simpler and profitable due to increased usage of these scales over the years.

On-board weigh scales are fully automated and don't need any human intervention. After the payload weight is taken, the weight readings are stored in memory. In addition to saving time, the scales also save money. On-board weigh scales have advanced load cell sensors, which are meant to let operators know when their vehicles are filled to a specific weight or capacity.

These weighing systems can be easily installed onto a truck chassis (or other form of equipment) without too much specialized knowledge. The weigh scale is connected through the vehicle's ignition switch and scale readout display interface to ensure that it is active when the vehicle is in use. 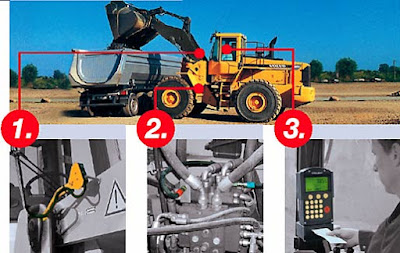 No buttons need to be pressed to operate the weigh scale. The payload weight appears on a digital display screen inside the vehicle. These weigh scales have three preset points which act to warn the truckers. A digital indicator and audio-visual warnings inside the vehicles themselves allow the operators to monitor the vehicle’s weight during the loading process.

On-board systems are extremely accurate and are customizable to withstand additional weight in the instance a vehicle is overloaded. Vehicle operators can record and take print-outs of weight data in real time. Further, the load cell sensors come in a variety of sizes to suit the wide range of vehicle frames. As a result, on-board weighing systems can be integrated on many types of load-bearing vehicles.

Traditional, external truck scale systems are generally not as efficient, as drivers will need to weigh loads at a specific weighing sight. Usage of on-board weigh scales increase the speed and accuracy of weighing loads as well as delivering the load to its next destination. In short, a lot of time is saved by using on-board weigh scales.

The different types of on-board weighing systems their application include some of the following:

On-board weigh scales save time, improve productivity and increase efficiency. To get maximum benefit of these leading truck weight scales, be sure to buy the on-board weigh scales from a dealer who is reputed and has considerable experience.
Posted by Unknown at 2:19 PM