Beyond Glory: An Inspiring Story Adapted to the Big Screen

Great books that chronicle the lives of war veterans often have a special place in the hearts of Americans. Larry Smith’s book Beyond Glory is one of those incredible stories that's not only an honest and true depiction of war, but is a book that's earning critical attention based on other creative renditions in the form of a playwright, and most recently, a film.

Before being adapted into a film, the play Beyond Glory was brought to stage by Stephen Lang in 2004. The one-man-show was so successful that Lang decided to bring it to the big screen. Together with independent film product company, 8180 Films, Stephen Lang later brought Beyond Glory to the big screen. With the recruitment war veteran-supporter and famous actor Gary Sinise as narrator, Beyond Glory the film has struck a chord with many viewers across the country.

Learn more about Beyond Glory the film below, or visit 8180Films.com for the most recent and up-to-date news and showings of the film.

Taking a Close Look at Beyond Glory the Film

The film is directed by none other than Larry Brand (of 8180 Films) and was written by Lang who plays the major role in the film. The film's producers include Rebecca Reynolds, James Carpenter, Noah Lang, and Ross Satterwhite. The film presents the audience with a creative blending of theater and cinema. It is a valuable testimonial of what the life of soldiers was like during World War II, Korea and Vietnam wars. 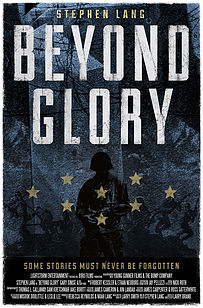 Stephen Lang's Beyond Glory follows the lives of eight Medal of Honor recipients. By bringing it to the big screen, Lang hopes to immortalize the lives of such war veterans and pass their stories over to future generations in the country.

Lang is the talent behind Beyond Glory. The actor is best known for his role in Avatar and a handful of other films. In this film, Lang uses his talent to portray the lives of eight soldiers from different ethnicities. It is not so easy to be able to portray the lives of eight different characters in their uniqueness. Lang manages to do so and brings these soldiers to life in front of the audience.

The film is not much about war as it is the story of human dignity and survival. Although very different, the eight soldiers are brought together by their commitment and dedication to a common cause. It is a tale of survival. Even if these soldiers were severely wounded in the wars, they came out of the war mentally intact.

Each war hero profiled in the film was given the Medal of Honor award. As he was exploring their lives, Larry Smith was amazed to discover that they were from different ethnic origins. The writer’s job as a journalist gives the book ( and its theatrical and cinematic adaptations) a realistic aspect.

The independent film Beyond Glory gives an unbiased account of the lives of these soldiers, with special emphasis on what binds them together, namely a honest dedication to preserve the country. The ability to transgress cultural and ethnic boundaries under a common purpose is what makes the film particularly appealing.

The film joins two great actors Stephen Lang and Gary Sinise. Lang admits that Sinise’s voice is a perfect match for the film and his background in military service makes him especially suitable for the theme of the film. On his part, Sinise expressed his delight in narrating the lives of America’s greatest heroes. The film is already screening in many parts of the world and is receiving a lot of critical attention.
Posted by Tyler Tafelsky at 8:37 AM